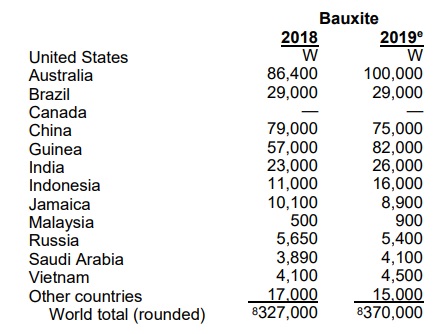 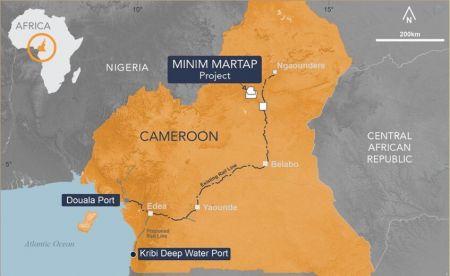 Global production of bauxite is forecast to decline by 0.1% this year, to 344Mt, according to analytics and data company GlobalData, with production being marginally affected by the temporary suspension of mines due to the Covid-19 pandemic.

The data firm said that production in Australia is expected to increase by 1.9% to 107.2kt this year, accounting for almost a third of the global total. Australia is the largest producer of bauxite, used to produce aluminium, and measures aimed at containing the spread of coronavirus across the country’s mining regions have meant that bauxite operations have been minimally affected by Covid-19 disruptions.

Rio Tinto, the largest bauxite miner in Australia, reported production of 24.8Mt of bauxite in the first half of 2020, up 8% year-on-year. The increase was primarily due to the ramping up of Rio Tinto’s Amrun mine in the far north of Queensland, Australia.

The production outlook is also positive for India. GlobalData senior mining analyst Vinneth Bajaj said: “In India, the fifth largest producer, bauxite was exempted from the country’s first 21-day lockdown period, with no major hindrance for bauxite miners thereafter. As a result, the country’s bauxite production is expected to increase by 6.5% in 2020.”

But China is expected to see a fall in bauxite output of 1.8% this year, despite China’s mines returning to full capacity from mid-April. Brazil could see a more significant drop, with GlobalData forecasting a 4.2% decline in the country’s output primarily owing to depleting ore grades.

Covid-19 disrupted smaller bauxite-producing countries more heavily, with Indonesia, Jamaica, Russia, Kazakhstan, Ghana, and Guyana expected to see a collective production drop from 37Mt in 2019 to 33.8Mt in 2020. In 2019, these countries accounted for 10.8% of global bauxite output, but this share is set to drop to 9.8% this year.

Tesla is ordering giant aluminium casting presses for its assembly line in Germany.

The “Gigapress” is the size of a small house and will replace with a single module around 70 parts that are currently glued and riveted into the car’s chassis.

Aluminium is one of the materials of choice for the electric vehicle pioneer because of its light weight and strength, which mean extra mileage and enhanced safety.

Indeed, aluminium is going to be one of the metals critical to the unfolding green revolution, not just for its role in transport but also for its use in renewable energy sources, particularly solar panels.

The problem is that making aluminium can be a carbon-intensive business. The sector accounts for almost 3% of global emissions.

The race to produce low carbon aluminium is now on as producers look to differentiate their product in a shifting consumer landscape.

But this widening rift between “green” and “black” aluminium risks fracturing the market’s current pricing model because a “green premium” is not only coming much faster than many industry players think, it may already be here.

The rocky road to zero
Aluminium smelting is an energy-intensive business, each producer’s carbon footprint is primarily determined by which power source it is using. Hydro scores low. Coal scores high. Gas is somewhere in the middle.

The average comes in at around 10 tonnes of carbon per tonne of aluminium produced but the global range can be anything from 4 to 18 tonnes, according to Antti Koulumies, Vice President for the aluminium line of equipment supplier Metso Outotec .

The sector’s energy efficiency has deteriorated this century as ever more of the world’s aluminium production has migrated to China, where coal is the predominant power source, Koulumies said.

He was speaking at this week’s CRU World Aluminium (Virtual) Conference, where producers lined up in something of a low carbon beauty parade.

Alvance, the aluminium business of British commodities tycoon Sanjeev Gupta, is rapidly growing via the acquisition of low-carbon smelters such as Lochaber in Scotland (hydro) and Dunkerque in France (nuclear). It’s on the lookout for more.

India’s Hindalco starts from the disadvantage of being coal-dependent but is building supplementary solar supply at its smelters with a target of 100 megawatts by March 2021, according to managing director Satish Pai. It’s a relatively low-cost way of reducing the carbon count per tonne of metal.

Hongqiao, one of the world’s largest producers, has gone for the very Chinese solution of dismantling two million tonnes of capacity in Shandong province (coal) and building a new smelter and “green” aluminium hub in hydropower-rich Yunnan.

The move will be completed in super-fast time by the end of Q1 2021, according to Ron Knapp, previously head of the International Aluminium Institute and now special adviser to Hongqiao’s chairman.

The industry’s ultimate goal is carbon neutrality by 2050, a target that may require redefining the Hall-Heroult smelting process itself.

ELYSIS, a joint venture between Rio Tinto and Alcoa is already there, using a process that eliminates all direct greenhouse gas emissions from smelting. Apple, a partner in the project, has already made its first purchase, according to Tolga Egrilmezer, head of Rio’s aluminium marketing division.

However, many producers, particularly those in China, are going to find the road to zero emissions a long and winding one, if not impossible.

The emerging split between “green” and “black” aluminium is only going to widen.

Splitting the market
Despite the rush by (mainly hydro) producers to differentiate their product, a “green premium” has so far proved elusive.

That’s partly down to a lack of agreement about how exactly to calculate “green” metal. Low-carbon producers are mutually wary of each others’ methodologies.

More fundamentally, there is not yet sufficient demand to generate a physical premium.

Western consumer brands such as Apple and Tesla are relatively well-supplied with low carbon aluminium from Canadian and European smelters.

Left to market forces, it’s uncertain how long it would take for demand to grow to the point that buyers need to pay a physical premium to secure supply.

However, it won’t be left to market forces.

“Astute and forward-looking policy makers are considering shifts to government procurement practices in order to value low CO2 materials (and) green borders,” Jean Simard said. Simard is head of the Aluminium Association of Canada, which gives some clue as to which policy makers he may have in mind.

But it is the European Union which is leading the way both by accelerating its carbon reduction strategy and looking at ways of penalising imports of high carbon products as a way of preventing “carbon leakage”.

Splitting the price
While a “green premium” may not yet have traded in the physical aluminium market, it is starting to take shape in the financial market, which is anticipating the forward curve both of carbon regulation and consumer demand.

Trade house Trafigura has just announced a low carbon aluminium financing facility of up to $500 million with the backing of Natixis and Rabobank. Interest will be “at a preferential” rate, which allows Trafigura to pay low carbon producers a premium for their product.

The facility will likely also be used to finance inventory. Aluminium is a metal that has historically carried high stocks, which are financed via the London Metal Exchange (LME) forward curve.

Such deals can last just a few months or they can be structured over years, in which case financiers are now facing a dilemma.

“Trading houses, which are running the bulk of cash-and-carry deals, are conscious that high-carbon products may trade at a discount to their low-carbon peers when these deals are unwound in 1-2 years,” explain analysts at Citi.

As carbon rapidly moves up institutional investors’ agenda, “Western banks may, over time, become more constrained in financing high-carbon materials”, according to Citi.

That differential in stocks financing requirements will be tradeable on the spot platform the LME is launching next year. The initiative complements a move towards voluntary reporting of a metal’s environmental foot-print.

It’s a neat way of dealing with the complexity of competing “standards” in a fast-evolving aluminium market. The hope is that the market itself will standardise the premium for low carbon metal over time.

But with different regions moving down the carbon-reduction road at different speeds, it seems unlikely there will be a single global “green premium” but rather a series of regional low carbon premiums trading in tandem with existing, traditional regional premiums.

Trafigura claims it was the first trading house to set up a low carbon aluminium trading desk in 2019.

It won’t be the last.

The opinions expressed here are those of the author, a columnist for Reuters.


Anheuser-Busch’s low-carbon beer cans
Anheuser-Busch is the largest brewer in the world. So it’s a pretty big deal that the beer giant is going to launch a new range of low-carbon cans. They’ll be made from aluminum produced by Elysis in Montreal, which produces aluminum with a net-zero smelting process using hydroelectricity. A-B’s kickoff plan is to produce 1 million low-carbon cans of Michelob Ultra.

The hydroelectric smelting technology has the potential to generate 30% less carbon emissions than traditional cans. It uses an inert anode — the positively charged electrode by which the electrons leave a device — instead of a carbon anode, meaning it emits pure oxygen instead of the carbon dioxide normally released at smelters.

Anheuser-Busch has made a commitment to reducing emissions across its value chain by 25% by 2025. It also estimates that 70% of its aluminum is currently recycled.

Since the majority of the world’s aluminum is made in Chinese coal-fired plants, Elysis’ and A-B’s hydroelectric plan is a welcome initiative.